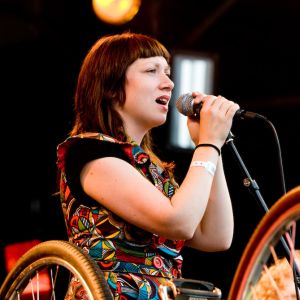 With her charmingly eclectic compositions and whimsical songwriting skills, a graduate of Norwegian Academy of Music in Oslo, now a Norwegian Grammy winner, Hanne Hukkelberg attracted our attention back in 2005. She was first featured on Aurgasm with her beautiful song “Ease”, and second time — for her powerful live version of the Pixies’ track “Break My Body”.

After gaining a reputation as a wonderful live performer, collecting positive reviews all over Europe, Hanne Hukkelberg is finally releasing her second, highly anticipated album Rykestrasse 68 in North America.

From crunching typewriters to bicycle spokes and other every day objects, you experiment quite a bit and use such unusual instruments. Would you tell us more about your recording process?

The recording process is something very different from the live performing to me. First I compose alone. Often a half year. Then I go in studio with my producer KÃ¥re Vestrheim for some months. Then I sort of translate this for a live session. But in studio I present my songs and my ideas for KÃ¥re and after that the two of us work with the material. Always in a different way with every song.

For six months you’ve lived in Berlin, Germany where you worked on your second album Rykestrasse 68. How was it? Would you share your impressions on how was it working far away from home?

It was great living in Berlin. Berlin is full of contrasts and inputs. But the most important is to just move away from my everyday life, to something else to reach thoughts and depths in my self I normally don’t have the time and pulse to get down to.

Your lyrics are wonderful. At times they seem to have certain ambiguous meanings. What are your inspirations?

In my creative processes, writing lyrics is the most difficult. But I just have to do it myself, because I have a need to express myself through text also. So I get very flattered when you think my lyrics are wonderful. My biggest inspirations are just what happens around me and thoughts I get out of it, books I read or stories others tell me.

Your version of The Pixies’ “Break My Body” is probably one of the most striking covers I’ve ever heard. Does this song have a special meaning to you? How did you come up with an idea covering The Pixies?

It was a pure coincidence that “Break My Body” became a cover. I was in my early days as an artist and I needed more songs. My stereo favourite was Pixies and Break My Body, so I brought it to my band, I told them to play it 3/4. And it became what it is today. It got its own life.

We would love to hear about your musical influences. Anything in particular you could name as your biggest influence and inspiration?

Your song “Searching” (from the debut album Little Things) was used as the soundtrack for Space NK’s TV and cinema advertising campaign. In the future, would you be interested in working on film scores? Do you have any upcoming collaborations and projects planned?

Absolutely. I am working right now with music for two short films. I like working and giving music to films.

We provide the readers of Aurgasm with great music they’ve probably not heard. Are there any tracks that you’ve been listening to recently that you’d recommend? What new music are you excited about at the moment?

Wildbirds & Peacedrums, my god, they are fantastic! But you need to hear them live…

Thank you so much, Hanne. 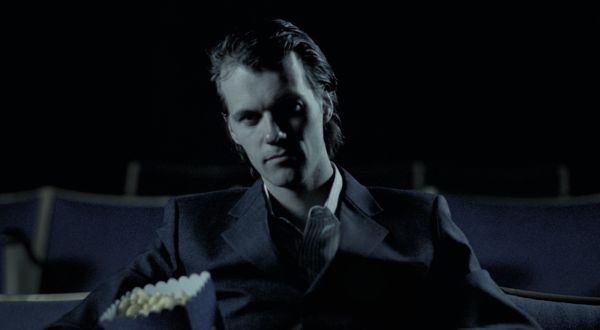 Multi-instrumentalist with a strong background in jazz, a member of Hello Saferide, Maia Hirasawa is one of the most adored artists in Sweden. Since her solo debut, Maia has received highly positive reviews throughout Scandinavia, been nominated as one of “the Women of the year” in two Swedish magazines, and her first single was mentioned in several audio blogs. One of her fun pop type songs, “Crackers” instantly makes the day colorful and lively, as listening to the catchy melody line, you will find yourself smiling and singing.

Glimpsing into a world of pop perfection.
Maia Hirasawa – Crackers
buy this cd

Throughout his strongly evocative pieces for the soundtrack of FarvÃ¤l Falkenberg, Stockholm-based composer Erik Enocksson reverberates the stories of a small sea-town life. As Erik Enocksson merges his minimalist folk tunes, sweeping instrumentation of acoustic guitars, piano, creaky wood, ethereal choir chant, and the simplicity of whistles and hand claps, he perfectly captures the feelings of isolation and hopefulness. Influenced by the coastal area, the soundscapes stimulate the sensation of brooding notes and a subtle hint of threat.

Light-hearted rhythms of various bossa nova interpretations come from all over the world, yet one could not expect such seamless recreation of summery vibes coming from the land of gloomy winters. In their album Kaksi Mannerta (Two Continents), the members of Emma Salokoski Ensemble easily mix the essence of bossa nova aesthetics and traditional Finnish folk. Richly melodic Caetano Veloso’s Brazilian pop, Madredeus’ modern folk influences, and Emma Salokoski’s bright voice, singing in her native Finnish, caress the ear, and certainly is the perfect antidote to chilly autumn air. 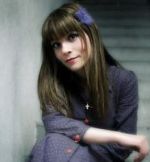 The charming debut of former Gus Gus singer, Icelandic-born Hafdis Huld, is a fun jaunt of quirky contemporary pop. Her girly voice crosses between the eccentricity of Cerys Matthews and fragility of Emiliana Torrini; her songwriting’s sweet but with macabre twists; and her arrangements never bore. Hafdis’ electronic noise, instrumentation of keyboards, xylophone, and especially the surprising country sound of banjo, amount to some bizarrely catchy musical romps.

Given that he hails from a country where the sun barely sets during the summer months, it’s not hard to understand how Norwegian producer and artist Bjørn Torske was able to create Feil Knapp, an engaging collection of blissful summer electronica. “Møljekalas” dabbles in bright island-esque percussion over an underbelly of melodic synthesized beats. “Hatten Passer” is more true to Torske’s DJ background: a deep pulsating bass line laced with dubby twists and playful whistling. 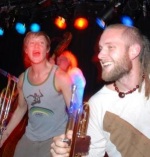 Swedish roots reggae, you read, with your eyebrow arching high? Oh yes. Of course I gave it the same skepticism that I give Japanese hip hop; how exactly can a culture so far away and even with different climatology bring authenticity and maturity to the genre? And yet this Swedish nonet creates a sound that is both respectful and innovative. You can’t deny ‘Ur Jord’ doesn’t have the catchiness of a Ben Harper or Dispatch tune, while ‘En Timme Kvar Att Leva’ starts you off completely differently−suddenly you feel like you’re in a Yann Tiersen score. (Amelie, perhaps?)

Jomi Massage is not the name of a woman. It’s an “electric massage device” from the early 1960’s, back when marketing such a device was rather daring. Songwriter Signe Hoirup Willie-Jorgensen wanted embody the sensual, touching and alluring feeling with her brave music as Jomi Massage. Listen to “Undressing Aloud” with your headphones plugged in: it is filled with sensuality, thrilling tenderness, and contains a certain vulnerable and fragile feeling. “Like weather” sounds melancholic, slightly moody and sorrowful.

Like being broadcast out of an Icelandic radio tower, Worm Is Green comes into frequency beset by tweaks, intermittent tones, and an ethereal voice. Then a lethargic squelch escorts you onto a slow but scenic dirge. These days I almost exclusively listen to music released in 2006 (blame it on the blog), but Green’s 2002 record Automagic is one of the few exceptions that won’t let go of me. Maybe its the sub-60bpm tempos. Perhaps its eclectic use of acoustic and electronic instruments. But what I really think is…