It’s always fun to check out my last.fm stats and see what I’ve aural addictions I’ve formed recently. The latest is DJ Rekha’s Basement Bhangra mix featured on Fader. Bhangra is one of those genre’s that I want to love more, but haven’t considerably found the sounds I want. Talvin Singh‘s old work qualifies, but this new release from Bhangra’s dirty princess delivers the ass-movers I’ve been seeking. The beat from “Teri Sadi” gets me riled, but peep the mix (or full CD) for the complete experience.

A little while ago, Ninja Tune announced: If the future of Big Dada could be summed up in one word, survey says “DURRRTAY”. While before they had the UK hipster hip hop scene covered with Roots Manuva and Ty; now the label is getting some looks for bringing out the bleeding-edge sweaty club sound. Their current roster shines with Philly’s Diplo (who’s been awfully quiet lately), France’s TTC, and Baltimore’s Spank Rock. The xxxplicit “Put That Pussy On Me” spits hot lyrics over a Snoop Dogg vs Beach Boys mash. The just released “Backyard Betty” has tweaky synths chirping over a mile-wide fuzzy bass sine-wave.
“Cutting edge without really caring; phenomenally rude without even meaning to be.“ 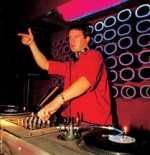 This powerful duo debuted originally with the name “The Dust Brothers”, but an American group with the same name (later well-known for the Fight Club soundtrack) pressed some litigation and forced a change. Though mildly bitter, the british Chemical Brothers carried on, releasing their first album appropriately named Exit Planet Dust. Now, ten years later, the two release Push The Button, a break-rocking record exploring their trademark dance-rock-rap mix. Though “Galvanize” has gotten the first-single attention, it’s the sophisticated dance track “The Boxer” that rocks this record. Hard.
Sorry Fatboy, they’ve come a longer way, baby.

You wouldn’t expect a french house song to start off with wailing electric guitars and a strong vocalist. And you wouldn’t expect a raspy synth line to kick the track into high gear. And you definitely wouldn’t expect this from France’s most well-known house group, behind Daft Punk. On their second album, Au Reve, Cassius took a departure from the standard house sound of synths and 1,3 bass – here, we’ve got guitars, melodies, and a song construction closely approaching that of a pop song.
An incredibly catchy driving track, despite the eerily odd combination of the song title and lyrics…

Cassius – The Sound Of Violence

Akufen’s unique sound arises out of a dedication to keep his listeners’ ears on their toes. For his acclaimed 2002 album, My Way, Akufen used a technique he calls micro-sampling; he would record hours of AM/FM radio and splice together half-second samples of different songs and voices to make a pattern-work quilt of fierce house sound. And now, just last month, The Rip Off Artist, Freeform, and Akufen collaborated on Blu Tribunal, a record to explore the convergence of blues and electronica. The music that came out is something you’ve never quite heard.
We’ve got two differently similar sounds here. Pick door number one for fractured house, two for the blues on mescaline.

Scanty, AKA Richard Marshall, is signed to the record label of mister Norman Cook, AKA Fatboy Slim — which should give you an indication of his musical style. In fact, for two years people actually thought Scanty Sandwich was just another of Cook’s pseudonyms; their sounds are near identical: hard-hitting bass, danceable funky music action. And naturally, I can’t serve you this butt-stomping groove without the original sampled track. “Shoo Be Doo Be Doo Da Day” was written by Stevie Wonder, but MJ covered it in sizzlin’ motown soul fashion.

Mind-stimulating dance music. ILS, aka Ilian Walker, was picked up by breakbeat godfather Adam Freeland after the promo Idiots Behind The Wheel hit Adam’s ears. The sound that he heard was something new: instead of an targeting the hard body-moving breaks and drum machine sounds of standard breakbeat, “ILS succeeded in bringing a deeper, jazzier, more intelligent flavour to the genre without losing its trademark punch.”[BBC Collective] The following tracks are off his latest release, Soul Trader.
This breakbeat’s got an organic, natural feel that gets your body and mind into the groove.

The music from Motown was the only stuff that could speak your soul and to your dancing feet. We all know Edwin from his classic protest song “War”, so much that Jackie Chan quotes it. Great song; this one’s even better. He recorded it a year earlier in 1969. The driving percussion feels like bullets shot at your toes (dance, sucka!) and the hard baritone sax and horns grab your shoulders into a solid groove. It’s a classic inescapable tune that got a little too forgotten. Revive it.
Throw down for a hot funky soul-filled number. Grab the big beat remix if ya feelin’ it.