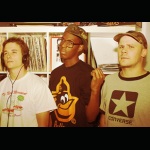 A little while ago, Ninja Tune announced: If the future of Big Dada could be summed up in one word, survey says “DURRRTAY”. While before they had the UK hipster hip hop scene covered with Roots Manuva and Ty; now the label is getting some looks for bringing out the bleeding-edge sweaty club sound. Their current roster shines with Philly’s Diplo (who’s been awfully quiet lately), France’s TTC, and Baltimore’s Spank Rock. The xxxplicit “Put That Pussy On Me” spits hot lyrics over a Snoop Dogg vs Beach Boys mash. The just released “Backyard Betty” has tweaky synths chirping over a mile-wide fuzzy bass sine-wave.
“Cutting edge without really caring; phenomenally rude without even meaning to be.“

Posted by Paul Irish on Friday, December 9th, 2005 under dance.