Multi-instrumentalist with a strong background in jazz, a member of Hello Saferide, Maia Hirasawa is one of the most adored artists in Sweden. Since her solo debut, Maia has received highly positive reviews throughout Scandinavia, been nominated as one of “the Women of the year” in two Swedish magazines, and her first single was mentioned in several audio blogs. One of her fun pop type songs, “Crackers” instantly makes the day colorful and lively, as listening to the catchy melody line, you will find yourself smiling and singing.

Glimpsing into a world of pop perfection.
Maia Hirasawa – Crackers
buy this cd

I came home from work grumpy and needed something upbeat. A track I couldn’t ignore. A clever hook I couldn’t help but smile at. Some percussion to make me nod my head and tap my fingers. I found exactly what I needed in Koop’s “Come to Me”. Horns. Cymbals. Hand claps. Classy, seductive vocals. It’s really just jazz, but it’s smooth and clean. When you tire of the syrupy sweetness, “Drum Rhythm A” is a crisp palate cleanser. Both these tracks glide off the new release Koop Islands.

Scanty, AKA Richard Marshall, is signed to the record label of mister Norman Cook, AKA Fatboy Slim — which should give you an indication of his musical style. In fact, for two years people actually thought Scanty Sandwich was just another of Cook’s pseudonyms; their sounds are near identical: hard-hitting bass, danceable funky music action. And naturally, I can’t serve you this butt-stomping groove without the original sampled track. “Shoo Be Doo Be Doo Da Day” was written by Stevie Wonder, but MJ covered it in sizzlin’ motown soul fashion. Whether digging country roots or rocking guitars, these hearty rascals from Greenwich, NY produce incredibly appealing tight rhythms, choral elation and rollicking stomp. Eastbound Jesus has a vibe I cherish at bluegrass festivals: kids running freely, families sharing meals, camping areas for jamming all night, and tents for free lessons. People are real and their good nature is alive. Thoroughly uplifting, Holy Smokes instills a sense of everything being alright even if you’re far from it. Songs reveal boyhood girl troubles, the workingman’s plight, and helpful lore with a refreshing dash of revolt. Open your windows and doors; feel sun-fueled air kite stymie issues. Hang laundry, clean dishes – dance, sing, paint! Let pieces puzzle together as you lead where life takes you.

Layers upon layers of sound that whooshing by you in a sonic fury. Norway’s Xploding Plastix erupted in their country’s impressive music scene with their debut, Amateur Girlfriends Go Proskirt Agents and earned themselves a Grammy for best electronica record. Their music is like James Bond lounge-jazz meets Amon Tobin; Henry Mancini vs. Squarepusher. Their blow-you-away website has all their music available, in high fidelity audio.
A triplage of gorgeous music, today, for you to indulge in. 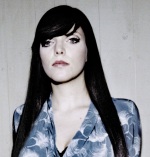 Annika Line Trost is a charming and charismatic creature. You probably know her from the Berlin duo Cobra Killer, who began as a part of digital hardcore movement. You hear her voice, her sound, and her gorgeous style as you click on play her album Trust Me (2006) lead you into the world of the urban rhythms and the most elegant darkness. Trost tells you her stories of cheap lipstick and love in three languages, English, German and French.

Be aware, she’s an addictive one.
Trost – I was Wrong
Trost – In Diesem Raum
buy this cd

During last year’s South By Southwest festival, hipsters heading down 6th Street on their way to the Bloc Party show were stopped when passing by a closet of a club called The Drink. Inside the giant sidewalk window, leadman Ola Salo was jumping from amp to ceiling light to drum set, while his band was pumping out firey glam rock action. Now, typically music with electric guitars and drums doesn’t strike my fancy, but The Ark definitely forces the volume knob up. ‘Rock City Wankers’ perfectly showcases their ability to instantly spawn a party with their vibrant attitude.
Dynamic rock that makes it impossible to stand still.

Mind-stimulating dance music. ILS, aka Ilian Walker, was picked up by breakbeat godfather Adam Freeland after the promo Idiots Behind The Wheel hit Adam’s ears. The sound that he heard was something new: instead of an targeting the hard body-moving breaks and drum machine sounds of standard breakbeat, “ILS succeeded in bringing a deeper, jazzier, more intelligent flavour to the genre without losing its trademark punch.”[BBC Collective] The following tracks are off his latest release, Soul Trader.
This breakbeat’s got an organic, natural feel that gets your body and mind into the groove. 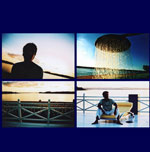 Little can put your mind at ease the way that some quiet bossa nova can. Fonseca, a producer and instrumentalist who has collaborated with Gilberto Gil, Caetano Veloso, and Bebel Gilberto, has been actively creating music since he was 12. He now is releasing Rive Gauche Rio by way of world music powerlabel Six Degrees. Fonseca has lately been working as one of the most desired producers in Brazil; his keen ear shows on this record – the sounds are beautiful, sensual, and slightly melancholic all at once. He duets quietly, subtly and smoothly on “Don De Fluir” in Spanish with Oscar-winning Urugyuan vocalist Jorge Drexler in typical Brazilian unhurried rhythm. As a surprise, Celso gives Damien Rice’s eerie and somber “Delicate” a new face; an interesting cross-continental cover with graceful guitar and heart-trodden percussion.
Feeling easy, warm sunshine, wading in the sea.