My good man Tom Korkidis (of Eksi Ekso) asked last week me to join him playing some music at a local pub, River Gods, in Cambridge. The night had a great vibe, a full house and plenty of worldly tunes. I wanted to offer my sets to you guys as well.

My good friends at Betahouse, a coworking space in Boston, asked me to put together a mix for their latest party. I was delighted to do so. My mate Tom Kershaw and I boiled down our fave tracks to a solid set.

I continued in the same vein as the Breeze & Sweat mix from 2006 – a sultry, funky, jazzy, chill to hot mix of tunes.

A few funky ones have debuted on Aurgasm before (Bahamadia, Flevans & Freddie), Kraak And Smaak deliver both the hot Max Sedgley and their own brand-new track, and Boston-natives Soul Clap close with some techno heat. 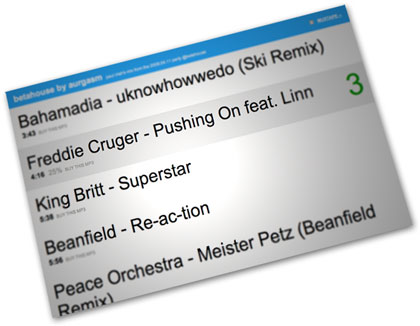 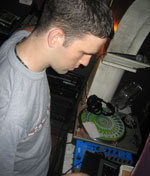 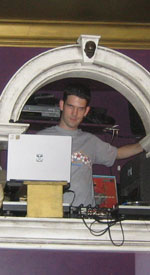 I was asked to DJ a one-hour set, though I had no previous DJ experience. I didn’t know how to beatmatch, transition smoothly, use Ableton or Traktor, and neither do you. You just have to be comfortable with being a laptop DJ.

I had never been to the venue and from what the outside looked like, I figured inside was a bunch of dusty overweight 30-year-olds with massive facial hair. I took a weekday evening trip over and had a beer inside, scoping out the clientele. I learned that from the balcony dj booth (!), I’d be playing for an affluent, educated set of 20- and 30-somethings that weren’t necessarily music nerds, but seemed receptive to different sounds.
Determine the theme
I thought about what music has moving me lately. While I wanted to do an all out electro-rock-dance-indie set with jams like Wolfmother’s “Woman (MSTRKRFT Remix)” and Madonna’s “Hung Up (Diplo Remix)”, I instead took influence from the very summery flavors of Nickodemus and Captain Planet.
Select your songs

I went through my entire music collection picking out the best tunes that fit the afrobeat/tropicalia/soul/funk vibe. If your audience won’t be earnestly dancing, don’t pick vocal-heavy tunes. Keep a mental picture of the venue inside your head as you listen to your potentials.
Narrow down your picks
After my first sweep, I ended up with 60 tracks, clocking in at 3.75 hours–far more than the one hour I was given. Toss anything that will garner significantly more or less attention than the rest of your set. I had to let go of some classics like Barrett Strong’s 1962 hit “Money”.
Cut it down to size

After tossing half my selections, I still had nearly an extra hour of music. Time for the surgery. I went in using audio editing software (CoolEdit and Audacity work) and cut out extra pieces: extra repetitive choruses, needless verses, instrumental solos. I wanted to keep the song lengths between 2 and 4.5 minutes to keep the energy level moving. [As this takes a bit of know-how and technique, this step is completely optional.]
Put them in order

I used Traktor to help identify the BPM of all the tracks. If you don’t have any audio software, just manually gauge the energy level on a scale of 50-150 for an approximation. My set started with my lowest BPM (79) and gradually worked its way up (with a few tweaks) to finish with my quickest song (126bpm).
Configure your crossfade

Using winamp? I suggest the SqrSoft crossfade plugin. Using iTunes? Even easier; if you left the default settings, your crossfade is already working, though you may want to tweak it in Preferences.
Play it!
Run through it at least once, in its entirety. Watch your levels, some songs are louder than others. iTunes has a fix for this called ‘Sound Check’; try it. Write on a notecard which songs have levels that stick out so you can tweak ’em with your mixer. Otherwise, you’re ready to go!

Well it’s about time for a finished product!

Grab my ‘Breeze and Sweat’ mix.

Like my How To? Be a cool kid and Digg This.

The Music of New Orleans

Many have been afraid that the culture and music of New Orleans being lost, but of all localized music sub-cultures, I’d consider The Big Easy’s as one of the most resilient. As the city’s instrumentalists were moving out of the city, their priority was locating their musician brethren. For now, the website of the popular N.O. venue Tipitina‘s serves as information portal on accounted and missing artists, donors providing housing and instruments, and upcoming gigs.

Well, come on everybody take a trip with me… way down the Mississippi, down in New Orleans!

The classic Gershwin tune. Bichet beat Louis Armstong to be the first important jazz soloist recorded, and also remains one of the finest jazz clarinetists of all time. His wide vibrato was trademark, along with forceful delivery, and well conceived improvisational ideas. He makes the clarinet soprano saxophone reed growl on this somber rendition of ‘Summertime’.

This’ll probably remind you of the comprehensive Ken Burns Jazz Special. Kid Ory was a pioneer of New Orleans music, leading a band in 1911 as a trombonist. He collorated with Sidney Bechet (the two fought often for lead), Jelly Roll Morton, and a young Louis Armstrong. He retired from music to run a chicken farm, but returned by request of Orson Wells to record this scorching ‘Tiger Rag’.

Very early one summer morning, Clarence Henry was performing on the bandstand and improvised his way into the basic riff behind “Ain’t Got No Home”. The crowd responded favorably, so he developed it further. Soon, Chess Records A&R was hustling Henry into Cosimo Matassa’s studio in September of 1956 to record. Local DJ Poppa Stoppa laid the “Frogman” handle on the youngster when he spun the catchy 45 and it stuck.

1958
Snooks Eaglin – When They Ring Them Golden Bells

Although New Orleans is generally thought of as more of a jazz and R&B town, the streets of the Crescent City also gave birth to a quite different strain of the music. The Acoustic New Orleans Blues style embraces everything from itinerant street singers and guitarists to rag-tag “spasm” bands. The blind Snooks Eaglin was known as a human jukebox inside the town, being able to pull hundreds of songs out from his eclectic repetoire, often confusing his own band.

Although they’re best known for “Chapel of Love”, the Dixie Cups wrote ‘Iko Iko’ quite accidentally. After the musicians had gone home from a recording session, the women were doing some overdubbing and started singing “Iko Iko” among themselves, using only a chair, drumstick, Coke bottle, ashtray, and drums as accompaniment. And although its roots are identified with New Orleans celebratory rituals, the song emerged as a quirky pop hit.

Lee Dorsey epitomized the loose, easygoing charm of New Orleans R&B perhaps more than any other artist of the ’60s. Working with legendary Crescent City producer Allen Toussaint, Dorsey typically made good-time party tunes with a playful sense of humor and a funky, gunnagetcha backbeat. The bassline here is infectiously evil. 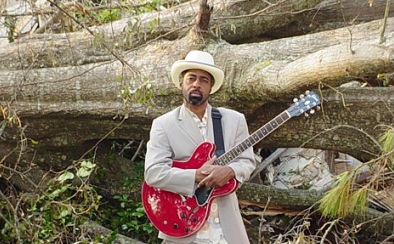 Other blogs covering the NOLA music scene:
Home of the Groove always showcased The Big Easy’s musical output
Jazz And Conversation offers up a mix of the spirit of New Orleans
The Entroporium has a number of choice Nola tracks
Soul-Sides rep’s some Allen Toussaint and The Meters
IckMusic has some essential Dirty Dozen Brass Band
Cocaine Blunts threw together the best of New Orleans Bounce

Full broadcast of Higher Ground, a show for Hurricane Relief live at the Lincoln Center.

I’ll make the easy assumption and say you deal with a good number of mp3 blogs on a regular basis. I’ve got a method of sampling the music on them that’s quick and easy. You can skip right to the music to see if you like it. The technique is essentially streaming the file to your audio player, instead of downloading the entire file first. This saves you time, energy, and lets you listen to much more music in less time. Check out the screencast below to get the skinny on it.

In the Christmas season, it’s easy to get lost in all the hubbub of shopping and presents; and it’s hard to focus on what really matters: the music. It’s time to bust out the family vinyl, queue up Handel’s complete Messiah, and explain to your little brother that the Trans-Siberian Orchestra is actually a clever marketing ploy trying to pass off a synthesized action movie soundtrack as christmas music. It’s sad but true: musicians want to capitalize on the spirit of the season and end up releasing crappy music to fill our never-ending demand. And then we, as true music fans, have to filter out all that trash and find the real gems.
Being the christmas DJ is a demanding job, but here’s some odd songs and safe bets your family is sure to enjoy.

Big shout out to all the other blogs participating in Music Bloggers for Democracy: alternate tuning : bars and guitars : the big ticket : bradley’s almanac : close your eyes : fat planet : kingblind : last sound of summer : largehearted boy : lost bands of the new wave era : moebius rex : mystery and misery : the napkin : radio babylon : republic of replicants : rummage through the crevices : scissorkick : something i learned today : songs:illinois : ttiktda : telephone thing : tuwa’s shanty : the witness exchange : and all the rest!
Comments Off on Election Special