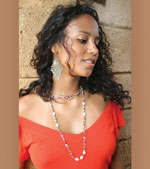 She was born in Cuba, grew up between Senegal, Angola, Germany and finally settled down in Cape Verde. You can feel the influence of all these locations her music; a soft and friendly accessibility met by a very developed melodic intellect. In much of her music, she sings in Cape Verdean Creole, which is a derivative of Portuguese. She’s not surprisingly up for Best Newcomer in the BBC Radio 3 World Music Awards. Her song “Lua” is a warm tropical treat; while “Regasu” is a somber ballad in the style of Cuban son Cape Verdean Morna. (Thx, Andre!)

Posted by Paul Irish on Tuesday, February 5th, 2008 under global.