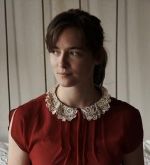 Expanding understanding of American roots music, in a place described as a cross between a garage and studio in Texas, Dawn Landes and The We Sorta Tried Bluegrass Band recorded a cover of Peter Bjorn and John’s “Young Folks”. As a result, the whole bunch rendered the pop classic into a bluegrass gem of switching male-female vocal parts, accompanied by acoustic stringed instrumentation. New York-based gifted interpreter, sound engineer and songwriter Dawn Landes possesses a natural ability for bridging raw folk and alt country, and the beguiling intimacy and spontaneity of her songs is comparable to such artists as Beth Orton and Cat Power.

Posted by Julija on Monday, November 19th, 2007 under folk, singer-songwriter.