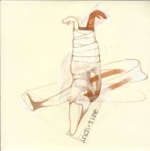 Stirring itself amongst the air molecules, Inch-Time’s music seems to honor the air that carries it. It treats the medium as a character in the music. Aussie Stefan Panczak (currently based in London) wields a precise production of organic and natural sampled sounds. He released this single early 2006 and has since released his LP on UK label Static Caravan. “Icicles & Snowflakes” peeked out at me from the recent Jazzanova & Resoul compilation Secret Love 3.

A deliberate leak from your speakers.
Inch-Time – Icicles & Snowflakes
buy this cd