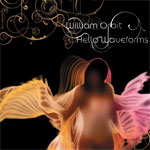 He crafted Madonna’s grammy-winning comeback Ray Of Light, been criticized by composer Arvo Pärt, loved by tranceheads (Ferry Corsten’s trance remix of Adagio For Strings, anyone?), and shunned by many others. (Seriously, what’s with the name?) Now, William Orbit is releasing a solo artist album far better than his previous Pieces In A Modern Style. To be honest, I don’t want to enjoy his music, but I can’t maintain disinterest. The album is entirely too cohesive–it sounds like different themes of the same (beautiful) song. But I’m still moved by the angelic melodies on this album despite their methodical (over)production.
An A+ album I wish were by someone else.

Posted by Paul Irish on Monday, February 13th, 2006 under electronic.