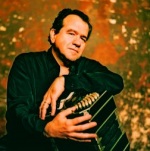 My first mental association with an accordion is my father playing christmas carrols on his, being so geeky it’s charming. But Richard Galliano has taken the accordion places I’d never imagine that old reedy squeezebox going. He revived the turn-of-the-century Parisan dancehall music known as musette which is often credited with introducing tango to the world. Once it hit the Paris scene in the 1930’s, as Paris was the center of fashion, it instantly became hip and spread. Galliano plays the works of his mentor, the tango great Astor Piazolla, with unmatched brilliance (‘Libertango’) as he does with the more traditional musette, ‘La Valse A Margaux’.
This ain’t your father’s squeezebox.

Posted by Paul Irish on Sunday, January 29th, 2006 under global.