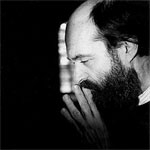 Now this is a twisted analogy, but if you can imagine Rachmaninoff as producer for Kanye West’s hit singles, then the brains behind the minimal “Wait Wait (The Whisper Song)” would be Arvo Pärt. You see, back in 1972, the Estonian composer completed his seventh well-received musical work, but felt it didn’t speak his true voice so he entered into a four-year period of silence and reclusion. During that time he studied plainsong, Gregorian chant, and Renaissance polyphony. When he emerged, he termed the radically different style of his music as tintinnabuli – characterized by simple harmonies and single tonal triad. Many draw similarities to minimalistic composer Phillip Glass, but Pärt’s approach relies less on repetition; rather, it builds from the most primitive musical elements – the triad and one specific tonality.
Classical compositions braving their beautiful, gentle simplicity.

Posted by Paul Irish on Monday, September 26th, 2005 under classical.