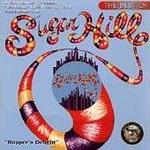 I imagine it’s pretty hard to remix songs that are as oft-played and over-sampled as much of the Sugarhill catalogue– and when I saw Still The Joint: Sugarhill Remixed in my local music emporium a few summers ago, I was a little dubious. But hey, it was the right price, so I picked it up and let it grow on me. Roots Manuva’s remix of ‘The Message’ by Grandmaster Flash, particularly, has been a regular fixture on my headphones ever since, with its shadowy horns and tight, controlled bass. Even better, though, is the way other tracks slink out of my iPod’s shuffle mode and take me by surprise, like the strut-worthy Two Lone Swordsmen remix of The Sequence’s ‘Funk You Up’.