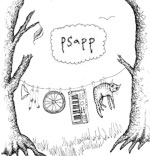 “It’s surely the most poignant songwriting ever to be underscored by toy animals and kitchen utensils“. The pleasure of listening to Psapp (pronounced sap) is how the two, Carim Clasmann and Galia Durant, develop songs with beautiful melodies accompanied by a tasteful touch of found sounds. After their 2004 release on the amazing Leaf label, Psapp took off with appearances all over the net and landing the Grey’s Anatomy theme song. In May, they’ll be releasing their second LP, entitled Only Thing I Ever Wanted, a strong collection of tracks that sneak fun into great songwriting. While you wait for that record to drop, pick up Tiger, My Friend if you don’t already have it. You need it.
Songs with little noises poking out.