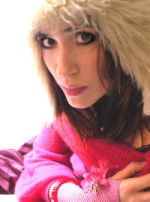 Most know her as the steamy voice behind Frou Frou, whose single “Let Go” raced up the bestseller lists with the debut of 2004’s Garden State. But Imogen Heap is a solo artist twisting together strands of classical, pop and electronica into an accessible but beguiling sound. Her new CD, Speak For Yourself, matches lush natural instrumentation against electronic pop creativity – an impressive record from an Essex, England-born girl. I had a chance to ask Miss Heap about her music and future. The interview below is laced with mp3s for your multimedia enjoyment.
Frou Frou’s “Let Go” is one of the most striking pieces of music used for a movie trailer. Many, many people were first exposed to you through the movie Garden State. How was Zach Braff exposed to your music? Ever meet him?

Funny you should ask as i met him for the first time last night at a gig I did at the El Ray in LA along with all the other guys on the Hotel Cafe tour. Totally unexpectedly walked right into the dressing room with about 20 mates while i was doing my hair. I saw him walk through the door and ran up to him like an old friend and gave him a massive hug. It was only then i realized i’d never met the guy before and that maybe that was a bit weird but he was totally cool and we were both saying how much of a fan we both were of each others work. I played Let Go that night for him. Cary Brothers is a mate of his (he’s was on the tour with us) and was also on the Garden State soundtrack. He told me the story of how it was the last song they needed to tie up the film. There were days to go and still nothing was sitting right. Everyone was frantically trying to find that song and then it was Zach girlfriend who came up with the idea of Let Go for that final scene. BIG thankyou to her!

Was Frou Frou meant to be a part-time thing between your own solo albums? Can we expect more music to be released from you and Guy Sigsworth?

Guy and I had never spoken of a second album. I think it was understood that i feel more comfortable as being a solo artist though he knows i love working with him. We’ve worked together on albums since i was 17! He produced my debut album’s first single “getting scared”. I was a huge fan of his first band Acacia. Their album Cradle is still one of my all time favorites. I’m sure we’ll work together in the future as we’ve always done in the past. I feel kinda selfish being in a band with him too as he’s such an amazing producer he needs to spread and share the Sigsworth love!

You signed with Almo Sounds as a teenager? Your first album there, i Megaphone, was a really strong debut. Comparisons are often drawn to Alanis Morrisette, Tori Amos, and Liz Phair – how do you see your earlier music now in retrospect?
Imogen Heap – Come Here Boy from i Megaphone (1998)

I very rarely listen to i Megaphone but i love it when i do. It reminds me of me as a teenager. It’s just like looking at old photos except i’m not embarrassed of them. People change a lot between the ages of 17 and 27 and it’s no different with music. I’ve learned a ton in that time in working with all the different bands from Urban Species, to Jeff Beck, to Frou Frou. I think lyrically is where i see the biggest step up from my debut. I think the music of i Megaphone is still very fresh and exciting. I don’t feel like it dates. I hope that this new album will never sound dated either. Vocally i am much happier with the way i sing now. I feel it’s more honest. Sometimes i listen to i Meg and hear me put on these voices. A kind of cod-american accent. I don’t like it when i did that looking back but i didn’t hear it at the time.

The anthemic a capella single “Hide and Seek” features your versatile voice both natural and manipulated, creating a really unique sound. Walk me through how the track was created.
Imogen Heap – Hide And Seek from Speak For Yourself (2005)

It was a sweet how that song happened. I had had a really bad “day at the office” as my shiny new computer blew up on me. Real puff of smoke and sparks material. i was about to leave the studio defeated which is always a bad thing. Those days can spiral into weeks and it’s important to try to do at least one thing in a day you’re happy with. Out of the corner of my eye i spotted my harmonizer (a little box that you hook up to a keyboard via midi so you can play in the notes you want your voice to transpose to in real time). I hadn’t yet written anything with this piece of gear but had always wanted to do an a cappella on this album. I powered it up and connected my microphone into the box and recorded the output to my minidisk. The first thing i sung/played and four minutes later was and is the melody and harmony of the final version. Lyrically it wasn’t all there apart from “Where are we, what the hell is going on?” and some random lines but i had the idea of Hide and Seek a while beforehand. It was like magic. Just as i struck the last chord a train went by outside the window and you can hear this in the final version. There was something so special about this version i was gutted it had no lyrics really to speak of but every breath and chord of the demo i copied as best i could to get everything from that 2am moment onto the record. I love this song as it feels as if it’s not mine because it took so little time to finish as others take weeks, months! Feels like a gift.

It’s incredible to me that you have both a blog and a flickr account – I read you even found the photographer for your liner notes on flickr! How does the blog and such help you connect with fans?

i started up my blog originally for helping me get things done in the studio when making the album. Going at it alone meant there was nobody there keeping me in check. I would spend 2 weeks on something that was slowing me down when i should have left it and come back to the problem at a later date when i was clear headed. The blog was set up so as i could write my thoughts of the day at the studio and keep a track of myself. You can go by a day and not get anything done and not feel too bad about it but if you feel someone’s watching you somehow these things don’t happen so often. It really helped me to focus and i started to set myself goals for the next day. Seeing a problem written down definitely helps to open up the solution just by seeing it written down. It seems like less of a big deal. It was fun then when the guys on the board started to talk about what i was up to. I’d get all sorts in my email from thanks, to suggestions to encouragement. When i was really stuck with the lyrics to Daylight Robbery i took it to the babble board. Set up a poll and asked the guys to choose one of three lyrical directions. I gave them a few days and once through i wrote the song with that theme in mind. I finished the song in no time after that because it wasn’t just for me now I was doing it for all of them too. I’ve had so much fun on the road meeting a lot of the ibabblers. Putting faces to avatars and screen names. It really is a cool community on there and they’re a really creative bunch.

I like that you use your blog as a way to keep yourself on track rather than a way to procrastinate.
Are you going to be doing vocals on any upcoming projects?

I’ve been doing all sorts since the record. Vocals for a band called Blue October, Temposhark also a remix for them which will be out in January, J peter Schwalm, a song for the movie “Just like heaven”, “spooky”. I’ve also been dabbling in production and have got something REALLY exciting coming up in the next couple of weeks that i can’t talk about because you never know what may happen…but if all goes to plan it’s going to be HUGE!!!

I provide the readers of my site with great music they’ve probably not heard.. are there any tracks that you’ve been listening to recently that you’d recommend?

Avril’s new album (not the Lavigne variety) “Member’s only” is one of my faves right now. Also into this Danish rock/electronic band Carpark North “All things to all people”. I’ve just come off of a tour and there was a guy touring with us called Jim Bianco who I really liked too. His album out now is “Handsome Devil”.