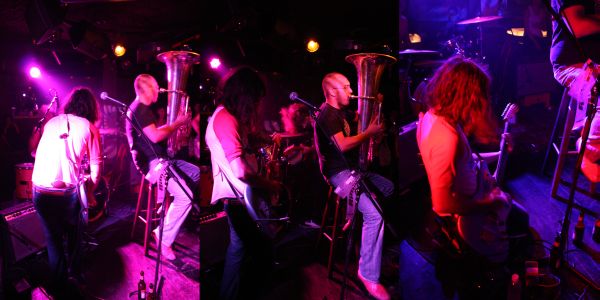 During my year spent in Tel Aviv I’ve learnt about many indie artists and been to a countless number of local gigs. Many of these discoveries I have already shared with you, avid readers, yet there is one act both Paul and I have been wanting to introduce to a wider audience of music lovers. Tel Aviv-based Boom Pam sounds unmistakably Mediterranean. There are Greek influences (think energetic Greek wedding music), Oriental motifs (traditional Middle Eastern melodies) and Balkan rhythms (passionate and vibrant) in their music. You can easily say as well it’s a Tel Avivian vibe, multicultural, stylish and laid back at the same time. “Wedding song” an up-tempo track from their almost entirely instrumental self-titled record features tuba and surf guitars and gives you a good idea of what Boom Pam sounds like. Boom Pam’s interpretation of Dick Dale’s “The Wedge”, Puerto Rican Nights (2008), is a mixture of Mediterranean heat and an American western movie.

Posted by Julija on Friday, October 23rd, 2009 under global, israeli.