I don’t want to be too self-congratulatory, but I have heard that David Byrne reads Aurgasm and Nic Harcourt (of KCRW) frequents mp3 blogs. But it’s really unknown what use mp3 blogs have been, or will be, to the music industry at large. Let’s assume for a moment that producers follow mp3 blogs as much as they crate dig in their search of the next great sample. Follow me down this path, will you… 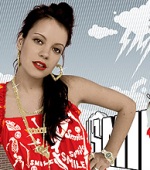 If you didn’t already hear, Lily Allen is ‘the next big thing’. Music geeks have been pushing her, wanting her songs will blow up in the US mainstream for a while. She’s definitely got the appeal potential: crisp and fun production underneath her own gritty urban storytelling. Her track “Knock ‘Em Out” was released as a B-side, but is now getting as much attention as her released singles.
Lily Allen – Knock ‘Em Out from Alright, Still (2006)
If you’ve been with Aurgasm for a while, that opening that forms the basis for the track might sound a little familiar. In December 2004 I shared a track by New Orleans pianist Professor Longhair. Take a listen:
Professor Longhair – Big Chief (1964)

Around the same time, a little more south, a Cuban vocalist by the name of La Lupe was gaining notoriety for her energetic live show and, quite franky, her near-insanity. Before joining Tito Puente’s tour, her fan-base included Pablo Picasso, Jean-Paul Sartre and novelist Ernest Hemingway, who called her act, “the art of frenzy.” Last October, I dubbed her song “Fever” as an mp3 gem in The Link List.
La Lupe – Fever (1961)
Chicago’s Rhymefest is best known for penning Kanye’s Grammy-winning single “Jesus Walks”, but you’ll hear that La Lupe track repurposed in this new single off his LP.
Rhymefest – Fever from Blue Collar (2006)