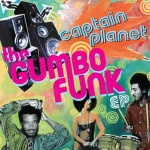 Hopefully by now you’ve dropped by Captain’s Crate, the blog of Charlie Bethel, aka NYC’s Captain Planet. The Cap’n has been pushing his eclectic and diverse soundset at parties across The Big Apple for years. His sound is similar to the upbeat jams from Nickodemus, The Theivery Corporation, and Quantic, taking in the best of afrobeat, samba, dancehall, hip hop and house. ‘The Don’ is off his recently released Gumbo Funk EP and features a tight amalgamation of world dance music with serious ass-shaking bounce to it.

They say, “a cross-cultural cornucopia of sound.” I say, straight fire.
Captain Planet – The Don (track 2 on the Aurgasm Summer Soundtrack)
buy this cd