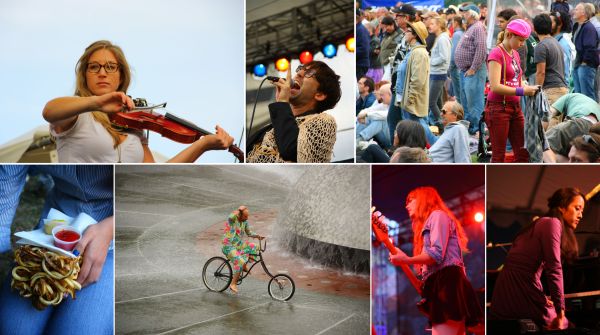 This year Seattle’s Bumbershoot marked its 40 years anniversary with an outstanding lineup of both critically acclaimed and up-and-coming musicians. Legendary Bob Dylan, folk goddess Neko Case, funky soul performer Jamie Lidell and the Mediterranean Balkan Beat Box are just a few to name. Following the Aurgasm spirit, below are a few acts we wanted to share with you.

The Budos Band
Aurgasm featured The Budos Band grabbed our attention for their truly irresistible afro-funky groove back in 2007. It’s a must-catch act for the fans of Menahan Street Band, Antibalas and the likes. Enjoy the soulful funk vibes of “Unbroken, Unshaven” taken from their recently released album The Budos Band: III (2010).

Ra Ra Riot
Mentioned already around the blogosphere, Ra Ra Riot were among the festival highlights on Sunday. From breezy pop to energetic indie rock, they won the hearts of the Seattle crowd.

Vienna Teng
Vienna Teng could be easily named the loveliest and audience-friendliest singer-songwriter of the festival. California-born Taiwanese-American pianist, Vienna actually is a software engineer who frequently performs across Europe and US. Vienna shared the news about going to grad school this fall, so unfortunately, we’re not going to hear from her any time soon. Enjoy her enchanting piano melodies:

Bomba Estéreo
Colombian Bomba Estéreo set the stage on fire with the rhythms of cumbia, champeta and bullerengue mixed with danceable electronic beats. A little on the edgy side, the psychedelic effects seamlessly blend into glamorous electronic carnival. Unstoppable energy!

Posted by Julija on Tuesday, September 21st, 2010 under aurgasm special.